The Kawanishi N1K-2 'Shiden Kai', one of the finest land-based fighters flown by the Japanese, is about to enter Blood Red Skies with IJNAF ACE Kaneyoshi Muto!

The Kawanishi N1K-2 'Shiden Kai' ("Violet Lightning") was an Imperial Japanese Navy Air Force (IJNAF) land-based fighter. Known by the Allied forces as "George", the N1K-2 was considered to be one of the finest land-based fighters flown by the Japanese.

Along with high speed, the Shiden-Kai offered pilots a rugged and agile aircraft packing four powerful 20 mm cannons in the wings. The result was an aircraft more than able to compete on level terms with the latest Allied fighters, such as the F6F Hellcat, F4U Corsair, and P-51 Mustang.

Supplied in limited quantities, the IJN distributed it to elite units such as the 343rd Kōkūtai Naval Fighter Group (created on the 25 December 1944 and commanded by Minoru Genda). The new 343rd Kōkūtai claimed Japan's finest fighter pilots such as Muto and Genda. 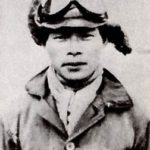 Kaneyoshi Muto earned his first air victory on 4 December 1937 during the Battle of Nanking when he shot down a Soviet-made Polikarpov I-16. He would go on to fight alongside Saburō Sakai on the island of Iwo Jima, surviving to be called by Sakai "the toughest fighter pilot in the Imperial Navy."

In December 1944, Muto was posted to the Japanese Home Islands to join Captain Minoru Genda in his elite 343rd Kōkūtai. By June he was posted to the 343rd Air Group, 301st Squadron commanded by veteran ace Naoshi Kanno.

On 24 July 1945, over the Bungo Channel, Muto and other veteran pilots scrambled to attack a larger group of American fighters. Greatly outnumbered, Muto was shot down and never seen again.

Every encounter with enemy fighters proved the Shiden-Kai to be a capable dogfighter, particularly when in the hands of the premier unit flying the Shiden, the 343 Kōkūtai. This unit was to remain operational until overwhelming unit losses obliged the group to stand down, eventually to be disbanded on 14 August 1945 when the Emperor ordered surrender.
Set contains: